Garmin International, Inc., a unit of Garmin Ltd. (NASDAQ:GRMN), yesterday announced that it will be showcasing its suite of pioneering marine products at this year’s Seawork, designed for individuals working within the commercial sector and vessels from fishing boats and workboats to RIBs.

Garmin’s vast range of marine products are all designed, developed and manufactured with longevity in mind to ensure they are rugged enough to withstand the harsh commercial marine environment. Products on display at Seawork include the new GPSMAP® 8400 and Echomap™ Ultra series, the latest Bluechart® G3 cartography as well as the award-winning Panoptix Livescope™. 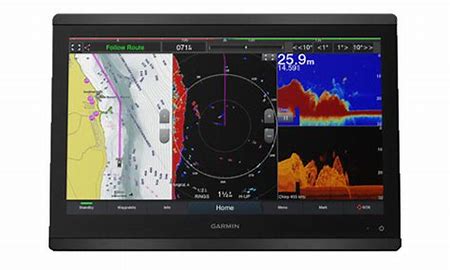 Available in 10-, 12- and 16-inch displays that feature full HD in-plane switching (IPS) screens with multi-touch control, the GPSMAP 8400/8400xsv series is Wi-Fi enabled and offers full connectivity and networkability, so mariners can completely customise their marine electronics system based on their needs and preferences.

For superior clarity and sunlight readability, the new GPSMAP 8400/8400xsv series offers full-HD IPS touchscreen displays that provide consistent, accurate colours that can be seen from all viewing angles, even with polarised sunglasses. The maximum glass design can be bail-, flush- or flat-mounted, enabling edge-to-edge installation of multiple displays.

The premium processing power found in the GPSMAP 8400/8400xsv series significantly benefits all onboard sensors like sonar, radar, cameras, video and digital switching, and enhances the user experience across the entire network. This lightning fast processor also delivers Garmin’s fastest map drawing capabilities, so there’s hardly ever a delay, even at high speeds. With SmartMode™, these multi-function displays (MFDs) are designed to give the user quick, one-touch access to the information they care most about. Users can configure and customise their entire system for activities ranging from docking, cruising, fishing, and anchoring with just one touch. For full control of the boat from the MFD, the GPSMAP 8400/8400xsv series also supports OneHelm™, an integrated solution that brings the power and convenience of controlling onboard boat systems like digital switching, lighting, stabilisation and more, to the Garmin display. A new line of keyed-assist 10- and 12-inch touchscreen chartplotters designed to bring professional performance to inland and nearshore anglers. Offering a best-in-class sonar solution, the ECHOMAP Ultra series has built-in support for Garmin’s crystal-clear Ultra High-Definition scanning sonar as well as the award-winning Panoptix LiveScope™ series, including the new single-array LVS12, that delivers live scanning sonar images of structure, bait and fish swimming below and around the boat in real time.

BlueChart g3 and BlueChart g3 Vision, a new line of cartography products for coastal and inland boating that blend the best of both Garmin and Navionics® content together for the first time to deliver unparalleled coverage and detail.

The new BlueChart g3 and BlueChart g3 Vision charts will both offer Auto Guidance1, a technology that instantly searches through relevant charts to create a suggested route based upon the user’s desired depth and overhead clearance.

This new Garmin cartography brings unrivalled detail and convenience to users with navigational aids, spot soundings, depth contours, tides and currents, and detailed harbours and marinas. It offers seamless chart presentation with up to 1-foot fishing contours that provide a more accurate depiction of bottom structure for improved fishing charts and enhanced detail in swamps, canals, marinas and port plans. What’s more, Garmin was the first to introduce Auto Guidance, and now this simple marine auto-navigation technology is included with all Garmin g3 accessory cards—all at no additional cost to the consumer. A live scanning sonar that gives anglers higher resolution and easier-to-interpret images of structure, bait and fish swimming below and around the boat than ever before. Garmin’s revolutionary Panoptix™ all-seeing sonar technology was the first to deliver live sonar images in real-time – forwards, backwards, sideways and below the boat – even while stationary. Now, thanks to the active scanning capabilities of Panoptix LiveScope, anglers can see images and movement so clear and precise that it’s even possible to distinguish between species of fish.

Like other Garmin Panoptix transducers, LiveScope features two modes in one transducer – LiveScope Down and LiveScope Forward – and can be installed on a trolling motor or the transom (recommended only for LiveScope Forward). Depending on the angler’s fishing preferences and techniques, LiveScope can easily be adjusted to change views. Simply point the LiveScope transducer down to see directly below the boat, or forward to see around the boat. Either view provides incredibly sharp, real-time scanning sonar images up to 200 feet down or away from the boat, even when the boat is stationary. LiveScope is also equipped with an attitude heading reference system (AHRS) that constantly adjusts sonar beams to compensate for boat motion, so even in rough conditions, anglers will still see a steady sonar image.

Garmin is the world’s leading marine electronics manufacturer and was recently named Manufacturer of the Year for the fourth consecutive year by the NMEA, an honour given to the most recognised marine electronics company for support of products in the field. Garmin’s portfolio includes some of the industry’s most sophisticated chartplotters and touchscreen multifunction displays, sonar technology, high-definition radar, autopilots, high-resolution mapping, sailing instrumentation, audio, entertainment and other products and services that are known for innovation, reliability, and ease-of-use. Other Garmin marine brands include FUSION Entertainment, Navionics – a premier supplier of electronic charts, and EmpirBus.