Lithium-ion batteries have been the cause of, and charged with, several notable marine fires in recent years. And now there’s talk of insurance companies refusing to cover boats. This is the time for boat owners to check their polices and speak to their insurance brokers, especially if they’re thinking of retrofitting lithium-ion powered engines.

The increased demand for slimmer, more compact and powerful electronic gadgets, and vehicles with higher ranges, means there is a greater need for batteries with higher storage capacity. Lithium-ion batteries are the most commonly used energy storage medium for consumer electronics and electric vehicles says Diabatix (makers of thermal engineering software).

As such, lithium-ion comes in many batteries, from those designed for electric vehicles (EV), to chargers for surfboards and other toys, and even mobile phones. And each of these has been blamed for devastating fires over the past few years.

Most recently, Felicity Ace sank after burning for almost two weeks in March 22. The abandoned cargo ship was transporting some 4,000 vehicles including Porsches, Audis, Lamborghinis and Bentleys.

On-scene reports indicated that the fire started in the ship’s cargo hold with a potential source cited as a lithium-ion battery from one of the electric vehicles.

The US National Transportation Safety Board investigation into the 75ft Conception, a dive boat, which caught fire and sank off the California coast in 2019, determined the fire began in a middle deck area where lithium-ion batteries were being charged.

And in 2018, MY Kanga caught fire while at anchor in the coastal area of Dubrovnik, Croatia. The safety investigation concluded that in all probability, the seat of the fire was the lithium-ion batteries which had been used with electric surfboards.

With the push to electrify the marine industry, battery makers citing lithium-ion as the future, and the retrofitting of electric engines, the danger which lithium-ion batteries could pose is causing some insurance companies to pushback.

Internet comment boards across the marine industry carry stories of individuals being refused cover from high street names, and being asked to agree to clauses accepting 50 per cent of any loss due to misbehaviour of lithium-ion batteries. Other forum members have said that if an owners’ system was not upgraded and installed by an ABYC certified electrician, claims may be denied entirely.

“And this”, says Mike Wimbridge, MD Pantaenius UK, is a huge challenge for leisure marine where, “retrofitting is coming into a sector filled with huge numbers of people who like to do things themselves.”

“Some insurers will not accept a risk with lithium batteries and some are taking a pragmatic view,” says Malcolm Stewart, branch manager for A Plan. “The best thing to do is speak to your broker and let them know what you are doing.”

A future full of lithium-ion

Ben Craig, a technical specialist at the Maritime and Coastguard Agency (MCA), says the general consensus has shifted to the position that there is enough lithium to meet the exponential growth of electric propulsion, due to the growing exploitation of mineral deposits around the world. Furthermore, manufacturing experience is rapidly making lithium batteries cheaper.

But which boats, and which journeys, can be conducted under full electric propulsion is a nuanced question. Craig notes that while the target of a fast-charging electric vehicle with a 500km range and a dense network of charging points is a reasonable replacement for today’s cars, pushing a boat hull through water requires a lot of energy, and commercial journeys may cover up to thousands of kilometres across the open ocean.

“Here’s the conflict,” says Wimbridge. “The movement to alternative sources of power has most people engaged… but, at the same time, the move towards electrical power and other sources is in its prototype stage.” And it’s the prototypes, and watered-down copies of the prototypes, that can also cause the issues.

The fire on MY Kanga occurred in September 2018.

The investigators said that the crew had been experiencing some problems with the batteries of the electric surfboards, with sea water leakage into three battery packs. The crew had noticed brownish-coloured water leaking from inside the batteries and had notified the manufacturers that they had intended to return them for repair/replacement.

“That boat would have been built to the highest standards,” says Wimbridge. “It was top end, professionally run, brand new, built to class, and was totally destroyed due to a battery on a toy.

“Large yachts are built to good standards. But owners want new jet surfboards or gizmos and the yacht becomes vulnerable to that. Plug-ins are not as robust as the yacht’s manufacturer’s own specification, and that opens-up vulnerabilities.

“People do buy batteries and chargers off brand,” he says, “human nature dictates that we often buy cheap, but we’ve all seen phone chargers blow-up.

“These mega yachts are vulnerable to charter guests coming on board and plugging something in and forgetting about it.”

“All the yachts are struggling,” says Simon Done, chief engineer on an 85m superyacht. “Everyone wants to bring on a flight board or this, that and the rest, but many yachts have just got old systems for putting out fires, like water and HyCC which just won’t do it for a thermal runaway.”

Thermal runaway is an uncontainable exothermic reaction that can occur inside a lithium-ion battery when it is damaged or short-circuited, explains Diabatix.

Lithium-ion batteries have their cathode and anode separated by an extremely thin polyethylene barrier. If this polyethylene barrier is damaged, a short circuit occurs, which results in the materials inside the cell starting to decompose. These decomposition reactions are exothermic, which is why the battery temperature quickly rises to the melting point of the metallic lithium, causing a violent self-heating chain reaction.

During thermal runaway, the battery heats up to over 600°C in a matter of seconds. This results in the electrolytes inside the cells disintegrating into simpler, more flammable molecules, such as methane, ethane, and hydrogen gas. The cathode also starts to decompose and release oxygen. These gases result in pressure and temperature build up inside the battery, and eventually, an explosion.

As reported in MIN, firefighters on Felicity Ace, couldn’t use water, because traditional methods do not stop lithium-ion batteries from burning. They had to tackle the fire from the outside by cooling down the ship’s structure as it was too dangerous to go onboard.

CED Technologies warns subsequent reignition is possible due to lingering toxic, flammable vapours in the air. Fires that ignite from these highly condensed energy battery packs burn longer and stronger than non-electric car fires. They are much harder to extinguish, take more smothering agents to extinguish, and can potentially melt the entire metal frame of the car.

“A fire hose at full speed won’t even put it out,” he says. “But these fires can happen from charging a jet ski battery, or a flight board battery.”

Done says these types of fires are preventable. Probes in each of the cells can monitor temperature and tell the charger it’s over a designate point which will shut down the charging.

“A lot of more modern systems have got this,” says Done, “but there are plenty of examples of boats which have had lithium-ion thermal runaway fires where they can’t put them out.”

But he believes that lithium-ion batteries can be managed.

And while this is addressed to all shipowners, ship operators, masters and officers of ships, ship designers and shipbuilders it’s worth reading by any owner who’s considering a retrofit.

As well as setting out in detail the precautions that need to be taken around lithium-ion batteries, it says that although a battery system will contain many cascading levels of protective devices, the vessel should not employ operational procedures that rely on these protective devices for a safe condition.

As Done says: “In essence, good quality lithium batteries with internal temperature monitoring systems that cut off charging outside of operating ranges will be sufficient to prevent fires. So they can be used in a safe manner. The problem is not all lithium batteries have these monitors, so vigilance is the key, especially when on continuous charge (which should be avoided).”

However, as Stewart says: “There is a lack of reliable information on lithium batteries on boats.”

Wimbridge agrees: “There’s not much data out there, but we know retrofitting electric batteries is difficult. There are lots of conversations around lithium. The assumption is that it’s the same for boating as to power – people share a battery between power tools. But owners must talk to their insurance company, as it’s not that simple. Where the insurance market is still unstable (storms in 2017, covid, Brexit, and Ukraine) their acceptance criteria might be easier to say ‘no’ to, than go through the hassle.

“And even if the insurance company says ‘yes’, it needs to be done professionally and signed off. Many insurer’s policies contain clauses that state that cover can be voided if clients retrofit a lithium engine without their knowledge/consent.

“You can never tell your insurers enough,” Wimbridge says. “If you’re thinking ‘should I, shouldn’t I’ mention this, the answer is always ‘yes’. You’re literally playing with fire.”

Neither of the lithium-ion battery manufacturers approached for comment responded. 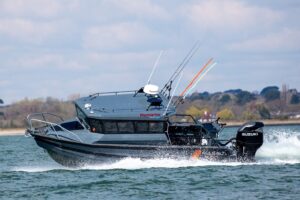